When you take stuff from one writer, it's plagiarism; but when you take it from many writers, it's research.
Wilson Mizner
Advanced search 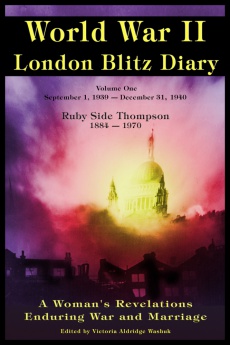 Ruby Side Thompson and ordinary woman living in London during World War ll. This diary is volume ! in series of 4. It encompass's 1939 and 1840. It is her diary written in her own words and is authentic.

This is important documentation and will have appeal to those who are interested in the effect war has on the average citizen.

"Friday 9-1-1939 - War started today. After another week of lies and duplicity, Hitler launched into actual warfare this morning."

So begins the diary of my great grandmother Ruby Side Thompson, a middle aged Londoner in a very dissatisying marriage who lived through the blitz and recorded it in daily entries in her diary. She writes about the horrors and bombings and raids that occured every day. Her diary was a place to release her frustrations both with the war and her marriage.

This is very heady stuff for history buffs to read what happened written by someone actually there. Her point of view is often politically incorrect and meant for just herself.