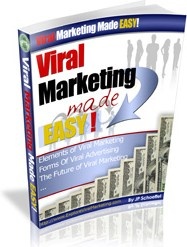 "What Does A Little Snowball, An Avalanche, And A Closely Guarded Secret Have To Do With Your Website, Your Visitors And Your Bank Account?"

In the next 2 minutes and 17 seconds you're going to learn how to use the snowball effect to double, triple, quadruple, oh heck, you're going to create an avalanche of traffic that grows so fast you'll hardly be able to keep track of your sales. You may want to call your bank manager and warn him to make more room in the vault for you.

If you've been hanging around the internet marketing community, you've no probably heard of viral marketing. It's certainly not a new concept. In fact it's been around since the Stone Ages. Back then we just called it word of mouth, or I guess back then it was more of a grunt, but either way, today we define viral marketing as

Done correctly, viral marketing can amass millions of visitors, members, and customers for your website. Done wrong and your website traffic stats look like the flat line on a frozen, dead man's heart monitor.

So let's get it right the first time...

When done correctly, viral marketing will...

The end result is a massive monster snowball that starts an avalanche. But think of how it all started. All you did was pack a fistful of snow and give it a little push. Other forces did the rest of the work for you. If you tried to build a massive monster snowball by yourself, it would have taken days or weeks, maybe even months. Rolling a little snowball down the hill accomplished the goal in a matter of seconds.


How does a little snowball apply to you and your business?

Think of the little snowball as your viral marketing message. You create the message, give it a little push to get it rolling, and the natural forces of human nature spread your message globally...if you do it right.

If you do it like 99% of all the other marketers, you have about a 1% chance that your little snowball will start rolling. Most marketer's snowballs just sit at the top of the hill waiting for a push. Meanwhile, the marketer sits beside his snowball wondering why it won't grow.

How can you ensure that your marketing message snowballs into an avalanche?

Mr. Schoeffel's credentials are more than an impressive track record. They're a testament to his results based plan of attack.

Schoeffel is a marketing strategist with over 11 years of field experience. He's worked for major corporations as well as small businesses locally and globally.

On November 2006, 4,500 people watched Schoeffel "naked" as he exposed his secrets for building, promoting and cashing in on ONE Single Site. (OK, he wasn't actually naked, but he did strip back the covering and reveal the naked truth about what he was doing).

In fact, there were 4,500 thuds in the room, when people's jaws dropped to the floor. Schoeffel revealed how his website stole the first, second and third spots on Google in Just 24 hours!

And as they say, "The proof is in the pudding." Customers continue to vote with their wallets as they snap up Schoeffel's products in a buying frenzy.

"For my first Firesale, I released 1000 copies and completely sold out in one week.

For my second Firesale, I doubled the price, released 700 copies, and they sold out in 5 days.

My third Firesale, I doubled the price again, released 500 copies and sold out in 3 days."

You're about to learn...

All of these methods can be effective to a certain extent, but they all require time and money. And the worst part is, they're all "one hit wonders." They hit the market, they peak, and they die...all in a matter of days. As soon as you stop advertising, your website traffic dries up.

But Viral Marketing is different. It's the perfect marketing strategy that continues to send traffic to your website day after day, month after month, year after year. And it's effortless. Once you've started the snowball rolling, you don't have to think about generating traffic for your website, it's already done for you.

Essentially, Viral Marketing is the "Holy Grail" of business promotion. Once you master it, you can succeed like you've never dreamed possible.

Imagine if you will...

You share a single message with a few people.

You're leveraging your time and money more effectively than using "old fashioned" marketing and advertising methods.