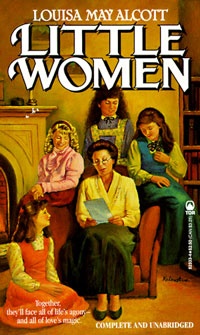 "Christmas won't be Christmas without any presents," grumbled Jo, lying on the rug.

"It's so dreadful to be poor!" sighed Meg, looking down at her old dress.

"I don't think it's fair for some girls to have plenty of pretty things, and other girls nothing at all," added little Amy, with an injured sniff.

"We've got Father and Mother, and each other," said Beth contentedly from her corner.

The four young faces on which the firelight shone brightened at the cheerful words, but darkened again as Jo said sadly, "We haven't got Father, and shall not have him for a long time." She didn't say "perhaps never," but each silently added it, thinking of Father far away, where the fighting was.

Nobody spoke for a minute; then Meg said in an altered tone, "You know the reason Mother proposed not having any presents this Christmas was because it is going to be a hard winter for everyone; and she thinks we ought not to spend money for pleasure, when our men are suffering so in the army. We can't do much, but we can make our little sacrifices, and ought to do it gladly. But I am afraid I don't" And Meg shook her head,as she thought regretfully of all the pretty things she wanted.

"But I don't think the little we should spend would do any good. We've each got a dollar, and the army wouldn't be much helped by our giving that. I agree not to expect anything from Mother or you, but I do want to buy UNDINE AND SINTRAM for myself. I've wanted it so long," said Jo, who was a bookworm.

"I planned to spend mine in new music," said Beth, with a little sigh, which no one heard but the hearth brush and kettle holder.

"I shall get a nice box of Faber's drawing pencils. I really need them," said Amy decidedly.

"Mother didn't say anything about our money, and she won't wish us to give up everything. Let's each buy what we want, and have a little fun. I'm sure we work hard enough to earn it," cried Jo, examining the heels of her shoes in a gentlemanly manner.

"I know I do -- mdash; teaching those tiresome children nearly all day, when I'm longing to enjoy myself at home," began Meg, in the complaining tone again.

"You don't have half such a hard time as I do," said Jo. "How would you like to be shut up for hours with a nervous, fussy old lady, who keeps you trotting, is never satisfied, and worries you till you you're ready to fly out the window or cry?"

"It's naughty to fret, but I do think washing dishes and keeping things tidy is the worst work in the world. It makes me cross, and my hands get so stiff, I can't practice well at all." And Beth looked at her rough hands with a sigh that any one could hear that time.

"I don't believe any of you suffer as I do," cried Amy, "for you don't have to go to school with impertinent girls, who plague you if you don't know your lessons, and laugh at your dresses, and label your father if he isn't rich, and insult you when your nose isn't nice."

"If you mean libel, I'd say so, and not talk about labels, as if Papa was a pickle bottle," advised Jo, laughing.

"I know what I mean, and you needn't be statirical about it. It's proper to use good words, and improve your vocabilary," returned Amy, with dignity.

"Don't peck at one another, children. Don't you wish we had the money Papa lost when we were little, Jo? Dear me! How happy and good we'd be, if we had no worries!" said Meg, who could remember better times.

"You said the other day you thought we were a deal happier than the King children, for they were fighting and fretting all the time, in spite of their money."

"So I did, Beth. Well, I think we are. For though we do have to work, we make fun of ourselves, and are a pretty jolly set, as Jo would say."

"Jo does use such slang words!" observed Amy, with a reproving look at the long figure stretched on the rug.

Jo immediately sat up, put her hands in her pockets, and began to whistle.

"Birds in their little nests agree," sang Beth, the peacemaker, with such a funny face that both sharp voices softened to a laugh, and the "pecking" ended for that time.

"Really, girls, you are both to be blamed," said Meg, beginning to lecture in her elder-sisterly fashion."You are old enough to leave off boyish tricks, and to behave better, Josephine. It didn't matter so much when you were a little girl, but now you are so tall, and turn up your hair, you should remember that you are a young lady."

"I'm not! And if turning up my hair makes me one, I'll wear it in two tails till I'm twenty," cried Jo, pulling off her net, and shaking down a chestnut mane. "I hate to think I've got to grow up, and be Miss March, and wear long gowns, and look as prim as a China Aster! It's bad enough to be a girl, anyway, when I like boy's games and work and manners! I can't get over my disappointment in not being a boy. And it's worse than ever now, for I'm dying to go and fight with Papa. And I can only stay home and knit, like a poky old woman!"

And Jo shook the blue army sock till the needles rattled like castanets, and her ball bounded across the room.

"Poor Jo! It's too bad, but it can't be helped. So you must try to be contented with making your name boyish, and playing brother to us girls," said Beth, stroking the rough head with a hand that all the dish washing and dusting in the world could not make ungentle in its touch.

"As for you, Amy," continued Meg, "you are altogether to particular and prim. Your airs are funny now, but you'll grow up an affected little goose, if you don't take care. I I like your nice manners and refined ways of speaking, when you don't try to be elegant. But your absurd words are as bad as Jo's slang."

"If Jo is a tomboy and Amy a goose, what am I, please?" asked Beth, ready to share the lecture.

"You're a dear, and nothing else," answered Meg warmly, and no one contradicted her, for the `Mouse' was the pet of the family.

As young readers like to know `how people look', we will take this moment to give them a little sketch of the four sisters, who sat knitting away in the twilight, while the December snow fell quietly without, and the fire crackled cheerfully within. It was a comfortable room,though the carpet was faded and the furniture very plain, for a good picture or two hung on the walls, e-books filled the recesses, chrysanthemums and Christmas roses bloomed in the windows, and a pleasant atmosphere of home peace pervaded it.

Margaret, the eldest of the four, was sixteen, and very pretty, being plump and fair, with large eyes, plenty of soft brown hair, a sweet mouth, and white hands, of which she was rather vain. Fifteen-year-old Jo was very tall, thin, and brown, and reminded one of a colt, for she never seemed to know what to do with her long limbs, which were very much in her way. She had a decided mouth, a comical nose, and sharp, gray eyes, which appeared to see everything, and were by turns fierce, funny, or thoughtful. Her long, thick hair was her one beauty, but it was usually bundled into a net, to be out of her way. Round shoulders had Jo, big hands and feet, a fly-away look to her clothes, and the uncomfortable appearance of a girl who was rapidly shooting up into a woman and didn't like it. Elizabeth, or Beth, as everyone called her, was a rosy, smooth-haired, bright-eyed girl of thirteen, with a shy manner, a timid voice, and a peaceful expression which was seldom disturbed. Her father called her `Little Miss Tranquility', and the name suited her excellently, for she seemed to live in a happy world of her own, only venturing out to meet the few whom she trusted and loved. Amy, though the youngest, was a most important person, in her own opinion at least. A regular snow maiden, with blue eyes, and yellow hair curling on her shoulders, pale and slender, and always carrying herself like a young lady mindful of her manners. What the characters of the four sisters were we will leave to be found out.

The clock struck six and, having swept up the hearth, Beth put a pair of slippers down to warm. Somehow the sight of the old shoes had a good effect upon the girls, for Mother was coming, and everyone brightened to welcome her. Meg stopped lecturing, and lighted the lamp, Amy got out of the easy chair without being asked, and Jo forgot how tired she was as she sat up to hold the slippers nearer to the blaze.