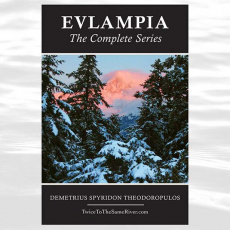 Evlampia - The Complete Series contains all four of the Evlampia e-books. The tetralogy is a view on the early days of the ascendancy of the New Times. The decisive but impossible to consummate rupture with the past, the pedantic search for new principles, and a desperate life that seeks to grow roots someplace beyond the soil of continuity are examined through the eyes of four different people at four different times. Their stories span the length of nine centuries and the width of three continents, yet their lives are intrinsically connected in ways they would have never imagined. The tetradic form of the four basic elements - air, earth, water, fire - is applied to the sequence of their individual narrations to underscore the dominant trait of their ordeals. Each one is guided by a singular spirit, by a natural element which upbringing and circumstances brought to preeminence, but in the end, they will all arrive to the same realization: the constant and uninterrupted primacy of a fifth one.

This e-book is available for purchase for $17.00 in PDF, EPUB (iBooks, Kobo, Nook, Android, Sony, and other eReaders), and MOBI (Amazon Kindle Devices) format.