The Second-Best Ranger in Texas Ebook 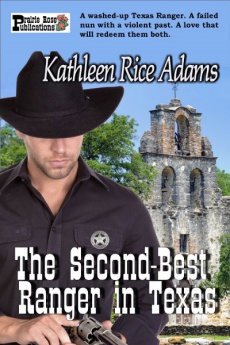 Quinn Barclay and Rodrigo Vega were partners for five years, pursuing some of the most dangerous outlaws in Texas. After Rodrigo's brutal murder, Quinn dives into a bottle of whiskey, but even that and the attention of every soiled dove in El Paso can't drown his grief and guilt.

The washed-up Texas Ranger vows to fulfill Rodgrigo's last request, but his only clue to the mission is his partner's dying words: "Take Dulce away from San Miguel." San Miguel lies along the Rio Grande river in Texas's notoriously violent Nueces Strip, but who is Dulce?

Sister Maria Tomas is ready to relinquish the sacred vows she never should have made. When she requests a childhood friend collect her from a tiny mission in the middle of nowhere, she has no way to know the only man she trusts is dead.

When the ex-ranger's quest collides with the failed nun's plea in a burned-out border town, unexpected love blooms among shared memories of the man who was a brother to them both.

Too bad he was also the only man who could have warned them about the carnage to come.