How to Win at Child Custody Battle Ebook 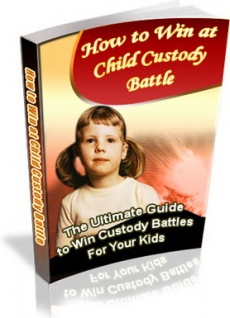 +$5
Title: How to Win at Child Custody Battle
Description:

To give you a better idea about this book we will provide you with a paragraph or 2 from each chapter. This book will provide a guide for you to understand what is involved in getting child custody.

Custody of Children After Divorce

The process of Divorce is indeed painful. And if the misery of a prolonged battle for custody and
monetary settlements are added to it then it is almost excruciating. Children from such a marriage
are usually seen to be laboring under considerable emotional stress already and a custody battle
is agonizing for them as well.

In some cases though, it is imperative to discuss the question of child custody before the couple
legally separate. The question of custody being an almost predominant issue in divorce suits you
would be wise to update yourself about the nitty-gritty's of the issue so that you can make a well informed decision.

Let us start from the basics. 'Child custody' is also referred to as 'guardianship', both of which are
part legal terminology. The terms convey the sense of a lawful and realistic bond between
parents and their children whereby the parents are required to look after the children and can
decide on important questions on the children's behalf.

The question of Child Custody arises when parents decide to put an end to their relationship with each other through divorce or annulment. Child custody refers to the legal and practical right over the child. Most countries follow the legalities put forward by the United Nations Convention on the Rights of a Child.

While trying to win child custody parents make various claims regarding themselves and allegations against their spouses/partners. False accusations of child sexual abuse, financial and educational incompetency made by parents against each other are common.

The legal process of Child Custody can be quite harrowing. Parents often lose their logic regarding this issue while coping with separation from their spouse/partner. In order to bring back a level of objectivity in the process, child custody cases are often counseled by psychologists.

There are mainly two types of child custody:


Getting Ready for Child Custody Trials

This is perhaps the most unpleasant part of divorce proceedings. Both you and your spouse fight tooth and nail to get child custody, each believing that he/she will provide for a secure future for the child, and take care of the child's needs. What follows is a rigorous trial which you must get prepared for if you have the best interests of your child at heart.

In these times, it is no longer taken for granted that the mother shall be provided with the custody as has been the norm for quite some time. Instead, the judges lay weight on which parent can provide for both emotional and physiological development of the child. It depends on the environment you will be able to offer the child.

Why do the courts seem to always favor the mother in a divorce when considering child custody? Is it that this is a throwback view from the days when the mother was a stay-at-home mother and therefore had nothing to do but watch and nurture the children? Will the court system ever join the twenty-first century in regards to child custody?

The rights of fathers has increased and changed for the better over time, but there is still a long way to go before there is real parity between mother's and father's rights. Women still tend to win in the custody battleground. Of course, the winners should be the children. Not everyone will be happy in these situations nor will they feel they have been treated fairly as to visitation, custody, or support payments.

Leaving the child entirely to the mother or the father not only affects the child in a serious way but also burdens the parent who has to take provide for the child. In the recent years the courts have tried to lay more emphasis on the needs and interests of the child rather than the rights of the father or the mother.

The child is free to go to his/her father or mother, while they are in the custody of either of them. The responsibilities are also not given entirely to one parent but are shared by both the parents.

A good way to tackle the problems of divorce, which is increasing rapidly, is mediation. Mediation encourages parental cooperation over matters regarding child custody and visitation rights. A mediator is appointed by the court who tries to find a middle ground between the two parents, keeping in mind the interest of the children.

The major part of the mediation takes place between the two parents with the mediator as a neutral member. His job is to make sure that the children are represented in the decisions regarding visitation among many others. Sometimes matters of school, doctor's appointments, and events can be settled during these sessions.

The rate of divorce has been increasing rapidly in the last couple of years. Parents going through a divorce are aware of the fact that custody arrangements need to be made for the children. The judge normally determines the custody arrangements on the basis of factors like the age of the child, his emotional bond with the parents, and the capability of the parent to provide for the child and so on.

Physical custody simply means that the child will live with the parent.

Legal custody means that the parent has the right to make the decisions regarding the child, for example, medical and educational decisions.

This custody can be shared, with the child living with one parent for one half of the year and with he other parent for the rest of the year.

There will be a number of local rules and procedures for filing your documents and should stick to these rules and procedures. If you choose to represent yourself, you will have to take the responsibility to know the procedures and timelines related to your paperwork and court appearances.

How to Find a Good Child Custody Lawyer?

Child custody procedure is not a very pleasant experience either for the parent or for the child. But then, this is the truth each parent has to face if they are planning for a divorce. You can make the best out of the present situation by coming to an amicable settlement with your ex-spouse and make arrangements for something which is favorable for the child. If you decide to take custody of your child, be very careful and determined. Remember, it is not going to be easy.

Judges are very strict before they issue a Child Support Order as it has been often found that it creates problem for an individual in a particular community. They make various enquiries before passing the final judgment in a divorce case.

Law has invested in the Judge the power to decide or enforce the amount that would be needed to bring up the child or any other modifications that are to be made for the child's welfare. The parties involved in the case must give due respect to the Judge and abide by his decision before taking any further step about child support.

Child custody cases are nowadays subject to much greater scrutiny at courts than before. What used to be a straightforward victory for the mother or the principal bread winner has developed into a grueling affair of deliberation without any sure result. Due to this, it is necessary for parents to concentrate on preparing themselves before their custody hearing.

These are some basic steps that can guide you towards the right direction.

The word custody refers to the judicial, legal and custodial rights of the parent to the child. It also pertains to certain particular duties and responsibilities on part of the parent for the child. There are various forms of child custody arrangement. The parents may amicably settle for a joint custody while in other cases it has been found that one of the parents demand sole custody. This choice of arrangement depends on the state from which you hail.

Also, the arrangement may vary from a certain locality to another. The jurisdiction of your locality may be different from that of your neighboring locality. The choice can also be made depending upon the preference of the spouse or the needs of the ward.

How Would You Preserve the Best Interest of Your Child?

How About a Joint Custody?

The phrase "in the child's best interest" is widely used in the family court in child custody proceedings. But it is used in many arbitrary senses by the family court or judges. Also, its meaning is slightly vague. The child custody law differs from state to state, thus, there is no uniform legal yardstick which determines what would be best for the child.

Are you contemplating a divorce? Or are you already going through with it?

If that is the case and you have offspring then the reading of this article is vital for you. You must remember to maintain civility in your relationship with your ex in spite of the divorce for the sake of your children. But sadly custody battles are hardly without bitterness.

Parents often try to use the child as an instrument for tormenting their ex. As a result the children, who are innocent, suffer. The following write up makes it clear why temporary child custody is vital to the final triumph in getting the custody in your favor.

Always, the most controversial issue in a divorce is that of child custody. The issue gains even more momentum when the child concerned is a special needs child. There are some reasons which can used to illustrate the specialty of such cases.