Most ignorance is vincible ignorance. We don't know because we don't want to know.
Aldous Huxley
Advanced search

East, A Mighty Gale Is Blowing – The First Book Of Evlampia Ebook 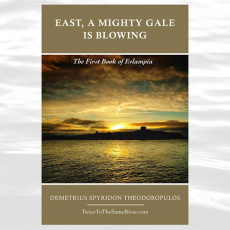 Short description: When M.E. de Valois was appointed private secretary to the living legend of politics Prince Talleyrand, little could he have guessed about the purpose of his work. His employer called the work "the mysterious strength of legitimacy," but others had already described it as "the present mystery of lawlessness." Its regime was one of curious ambitions. It claimed clarity and justice as its reasons, but ambivalence was its fashion and duplicity its condition; and while allegiance was its first command, treason appeared to be its rite of passage.

This e-book is available for purchase for $4.00 in PDF, EPUB (iBooks, Kobo, Nook, Android, Sony, and other eReaders), and/or MOBI (Amazon Kindle Devices) format.

Short excerpt from Chapter 1 - Tale of a civil servant: Names, names of all sorts, and their legitimacy and relevance are my trade. Their examination had always absorbed a great deal of my working time, and now that I retired, it remains a source of occasional surprise. A demanding but thankless calling it is, as names these days are known to be able to move mountains, and yet too little attention will be spent on their origin or significance. Their ownership is neither protected nor respected, and in fact, should it by any chance be construed as fit to imply hereditary claim to estate or privilege, or - God forbid - to continuity with a better past, it could be illegal. Mine is Maurice Étienne de Valois; of the ancient family of noble or, to be precise, royal renown. My country was once ruled by the Valois. It can be safely said that it was a Valois, Princess Margot, daughter of the Black Queen, who handed the Crown of France to Henri IV and the Bourbons. And, along with the crown, she passed on the poison and the duplicity of the able but petulant Florentines who had worn it: the hatred of the Medici fomented no less than eight civil wars. Such were our beginnings, and now it looks, once more, as if not much has changed. To this day, after so many revolutions and wars, we still toil, just the Italians had done before us, in the same barren field of a doubted legitimacy and a threatened existence. And it still is what it has always been: a frantic quest for some kind of permanency, and a fractured reflection which keeps eluding our contraptions. It may sound fatalistic, and it could of course be but plain coincidence, but my story too, like the Bourbons', has to begin at the end of a dynasty, again, with a wronged Valois.