Dogs and All About Them Ebook

Dogs and All About Them
Category: Dogs 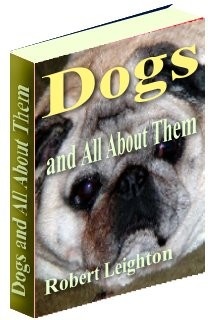 +$5
Title: Dogs and All About Them
Author: Robert Leighton
Description:

ASSISTED BY EMINENT AUTHORITIES ON THE VARIOUS BREEDS

Dogs And All About Them by Robert Leighton
is about the anatomy, behavior and care of almost all popular breeds of dogs.

There is clear explanation of the origins of dogs, the types available and how each type behaves.

The greatest feature of the ebook is how various types, Non-Sporting and Utility breeds, Hounds,
Gundogs and other Sporting breeds, the Terriers, Toy and
Miniature breeds bear close resemblance to each other yet distinct in reaction and appearance.

Every Dog lover will surely love this highly-informative manual to breeds.

GENERAL HISTORY OF THE DOG

There is no incongruity in the idea that in the very earliest period of man's habitation of this world he made a friend and companion of some sort of aboriginal representative of our modern dog, and that in return for its aid in protecting him from wilder animals, and in guarding his sheep and goats, he gave it a share of his food, a corner in his dwelling, and grew to trust it and care for it. Probably the animal was originally little else than an unusually gentle jackal, or an ailing wolf driven by its companions from the wild marauding pack to seek shelter in alien surroundings. One can well conceive the possibility of the partnership beginning in the circumstance of some helpless whelps being brought home by the early hunters to be tended and reared by the women and children. The present-day savage of New Guinea and mid-Africa does not, as a rule, take the trouble to tame and train an adult wild animal for his own purposes, and primitive man was surely equally indifferent to the questionable advantage of harbouring a dangerous guest. But a litter of woolly whelps introduced into the home as playthings for the children would grow to regard themselves, and be regarded, as members of the family, and it would soon be found that the hunting instincts of the maturing animal were of value to his captors. The savage master, treading the primeval forests in search of food, would not fail to recognise the helpfulness of a keener nose and sharper eyes even than his own unsullied senses, while the dog in his turn would find a better shelter in association with man than if he were hunting on his own account. Thus mutual benefit would result in some kind of tacit agreement of partnership, and through the generations the wild wolf or jackal would gradually become gentler, more docile, and tractable, and the dreaded enemy of the flock develop into the trusted guardian of the fold.

In nearly all parts of the world traces of an indigenous dog family are found, the only exceptions being the West Indian Islands, Madagascar, the eastern islands of the Malayan Archipelago, New Zealand, and the Polynesian Islands, where there is no sign that any dog, wolf, or fox has existed as a true aboriginal animal. In the ancient Oriental lands, and generally among the early Mongolians, the dog remained savage and neglected for centuries, prowling in packs, gaunt and wolf-like, as it prowls to-day through the streets and under the walls of every Eastern city. No attempt was made to allure it into human companionship or to improve it into docility. It is not until we come to examine the records of the higher civilisations of Assyria and Egypt that we learn any distinct varieties of canine form.

Assyrian sculptures depict two such, a Greyhound and a Mastiff, the latter described in the tablets as "the chained-up, mouth-opening dog"; that is to say, it was used as a watch-dog; and several varieties are referred to in the cuneiform inscriptions preserved in the British Museum. The Egyptian monuments of about 3000 B.C. present many forms of the domestic dog, and there can be no doubt that among the ancient Egyptians it was as completely a companion of man, as much a favourite in the house, and a help in the chase, as it is among ourselves at present. In the city of Cynopolis it was reverenced next to the sacred jackal, and on the death of a dog the members of the household to which he had belonged carefully shaved their whole bodies, and religiously abstained from using the food, of whatever kind, which happened to be in the house at the time. Among the distinct breeds kept in Egypt there was a massive wolf-dog, a large, heavily-built hound with drooping ears and a pointed head, at least two varieties of Greyhound used for hunting the gazelle, and a small breed of terrier or Turnspit, with short, crooked legs. This last appears to have been regarded as an especial household pet, for it was admitted into the living rooms and taken as a companion for walks out of doors. It was furnished with a collar of leaves, or of leather, or precious metal wrought into the form of leaves, and when it died it was embalmed. Every town throughout Egypt had its place of interment for canine mummies.