True Memoir of How a Budding R&B Musician Survived the 60's, Drugs, and a Nutzoid Mom
Category: Adventure, Travel, Relationships 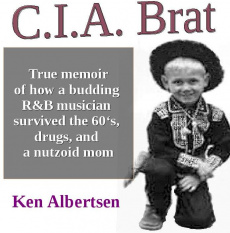 Tells the true story of a boy, from birth to age 22, who changed schools 11 times, located in five countries employing four languages. The dad was a career CIA man who had segued from OSS after WWII. The mom was not-so-typical housewife of the 50's and 60's who, among other odd things, tried getting her three boys hooked on booze and cigarettes before they were teens.  Musical influences affected the boy showcased in the memoir, at many junctures in his life. He started gigging on blues guitar in smoky blues clubs before the age of 17. He fronted a six piece R&B band gigging all over the Wash. DC region a few years later. That band had a 3-piece horn section and half the songs were originals. The reference to 'drugs' in the subtitle pertains to the mind-altering drugs which most teenagers dealt with in those heady times. Drugs can be used to 'get kicks' for sure, but the CIA story delves deeper, and articulates how some drugs can enhance deep spiritual explorations.

This memoir is suitable for any age group over 10, and perhaps most appreciated by adults. The author has published 11 books on as many different topics, including Tibetan Buddhism, political satire, homesteading, Thai language, fasting, Himalayan Explorers, and even a dollop of science fiction. The author resides in Thailand and runs an outdoor Adventure Park called Boomerang.