Announcing an important message for parents...

"Has Your Child Been Diagnosed With ADHD? Is Coping With Your Child's Behavior Wearing You Out? Are You Tired of Searching For Answers?"

Attention: If you answered "Yes" to those questions, read on. This may be the most important letter you've ever read...

Welcoming a child into your family is one of the happiest times for a parent. You enjoy watching them grow year by year.

However, as parents we worry about everything...

Then, once it's time to send them off to school a whole new set of worries kicks in! I think when they start school it is harder on us then it is on them!

Being a parent myself, I want to share a story with you...

I know a little boy in my neighborhood.

Going to school was an adventure for him. He was able to meet new friends and discover new things.

His mother prepared him for school the best she could. Yet regardless, she continued to worry. Was he making friends? Was he having fun? Was he ok?

Having him come home from school after being bullied all day or getting in trouble was one of her biggest fears.

At first, everything at school was great. He loved going to school. He talked about all his new friends. He came home from school with all kinds of pictures he'd made that day. Then the trouble begin...

His mother started getting notes home from the teacher.

Her son was not getting along with the other children in his class, and would not stay in his seat. Next thing his mother knew she was looking at a report card with failing grades.

To make matters worse his bad behavior continued at home.

He was always fighting with his siblings and being defiant. Eventually at night, his mother ended up in tears unable to figure out what was wrong with her son.

It all ended up making her wonder where the loving son she had known had gone. She even tried to figure out how she had failed him.

Even though we now know that it was not anything she did wrong... she did not fail him.

You see, a teacher sat down with her at the school and suggested that it was possible her son has ADHD.

Feeling the fear tightening in her chest, his mother was unable to respond. The teacher gently continued to tell her that she might want to have her son checked out by her doctor.

If so, you can sympathize with the mother who suffered as her son now had the ADHD "stereo-type" to deal with.

I know the feeling all to well.

The child in the story is my nephew. I've experienced the process firsthand.

From the disbelief through the treatment and finally seeing my nephew succeed and return to the happy, outgoing child he once was. The one thing I can promise you is that there is hope! Times are changing!

An ADHD child does not have to have a "dark cloud" over his or her head.

If You've Got Burning Questions About ADHD, I've Got Answers!

There's a brand new audio product just for parents like you called ADHD Secrets Uncovered, and it's got the answers to all your biggest questions concerning ADHD!

Not only does ADHD Secrets Uncovered reveal exactly what a diagnosis of ADHD means, it also covers how doctors diagnose ADHD. It explains treatment options in addition to traits and characteristics of ADHD.

There is so much needed information contained in ADHD Secrets Uncovered, I only wish it had been available for us when we were going through trying times. It would have definitely saved us a lot of pain and confusion.

I'm going to share some of the information in ADHD Secrets Uncovered with you.

However, I want you to keep in mind that it's simply an overview. If you have a child with ADHD, then I cannot stress to you enough how important this audio will be to you!

So what is ADHD Secrets Uncovered? 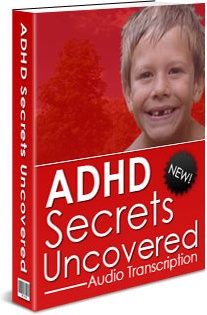 ADHD Secrets Uncovered is an in depth interview with ADHD expert, Deena Kotlewski, MA, LCPC. She earned her Masters Degree in 1995 and has been a therapist ever since. She is currently the School Counselor for the Montgomery County Public Schools and also maintains her own private practice.

Most of the children she works with generally feel depressed, anxious, and/or sad. She works with these children and adolescents who have been diagnosed with ADHD to help them navigate through life's challenges.


Now, let's talk about what ADHD really is...

There are actually three different types of ADHD. Each type has a different set of symptoms.

With the Predominately Inattentive type of ADHD, the child may fail to pay attention to details and have difficulty sustaining attention to a task or activity. They may also seem like they aren't listening when spoken to directly.

In addition to the symptoms I just mentioned there are many more symptoms associated with this type of ADHD...

With Predominately Hyperactive/ Impulsive type of ADHD, the child may fidget or squirm in their seat. They may have difficulty waiting their turn and interrupt others.

Again, these are just a few of the symptoms of someone diagnosed with Predominately Hyperactive/Impulsive ADHD. However more commonly, children display a combination of the two types of ADHD.

The information contained in ADHD Secrets Uncovered is an absolute must have for every family dealing with ADHD. You'll get a revealing, in depth look at all three types of ADHD along with the symptoms and diagnosis criteria...

Believe it or not, ADHD is pretty common and it is very real.

Would you be surprised if I told you that using the statistics of ADHD, it is possible for one child in EVERY U.S. CLASSROOM to be diagnosed with ADHD?

I know I was. I never dreamed that many children had been diagnosed. ADHD affects an estimated 2,000,000 American Children.

What this means is you could literally walk down a hallway at any school in the United States and see a surprisingly high number of children with ADHD.

With the recognition ADHD is receiving, it is sure to breakthrough the society of "stereo-types" and into the society that finally understands ADHD and extends its hand in kindness.

So, we've talked briefly about what ADHD is, now let me tell you what it isn't.

Dysfunctional parenting does NOT cause ADHD!

It also is not caused from a lack of intelligence. Quite the contrary!

Researchers have found that children with ADHD who have been able to sit still long enough to take the lengthy IQ tests have been shown to possess higher IQs.

Believe me, I know all about the stereo-types. I am well aware that some people believe that there is not anything wrong with these kids that proper parenting wouldn't solve. I have also heard the excuse that ADHD was created in order to make it easier for teachers and parents to deal with difficult children.

Rest assured that is NOT the case at all.

ADHD is as real as every other medical disorder. Your child has been diagnosed with a Bonafide medical condition that has its own diagnostic requirements as well as treatment plans.

Fesearchers have found that there is no specific cause for ADHD. There are actually many different "causes" of ADHD. Each child diagnosed with ADHD could all essentially have a different "cause".

However, studies have been done that show that there are in fact biological links to ADHD. The same has been found with chemical, genetic, and environmental links. ADHD can also be found to co-occur with other disorders.

An estimated 40% of boys with ADHD also have Oppositional Defiant Disorder, which is characterized by negative, hostile, and defiant behavior. At least 25% of children with ADHD also suffer some type of communication or learning disability.

Researchers have found that there are several contributing factors for ADHD. While these factors are not a guarantee that a child will have ADHD, they can assist doctors in the diagnosis of ADHD.

Some of the contributing factors of ADHD are:

Parents need to understand that their child's behavior is not within the child's control.

Bottom line is regardless of what caused the ADHD it can be treated effectively.

After listening to ADHD Secrets Uncovered, I'm certain you'll have a much better understanding of ADHD. While we've covered the basics of ADHD, there is still much that is important for you to discover.

You'll learn a wealth of important information every parent needs in order to help his or her child who has been diagnosed with ADHD.